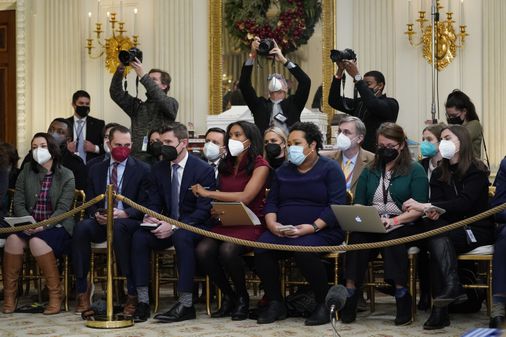 Of course, an upheaval is always possible. But it seems reasonable to predict that voters this fall, barring something truly unexpected, will hand over control of both houses of Congress to the Republican Party. Democratic loyalists and progressive activists, who hate the GOP and view conservatives as a deadly threat to American democracy, will be appalled. This means that a large part of the traditional news media, including liberal political bias and Democratic Affinity to have since a long time widely recognized as facts of american lifewill be dismayed too.

Get Weekend Reads from Ideas

A weekly bulletin from the Boston Globe Ideas section, forged at the intersection of â€œwhat ifâ€ and â€œwhy notâ€.

When Republicans in the 1994 midterm elections took control of the House and Senate for the first time since 1952, leading reporters rained contempt on the electorate for its rightward shift. Peter Jennings, then ABC’s most prominent news anchor, compared voters to 2-year-olds throwing a tantrumâ€œThe stomping footsteps, the rolling eyes, the screaming â€“ it’s clear that the anger controls the child and not the other way around. . . . Imagine a nation full of 2 year old uncontrolled rage. Voters had a tantrum last week.

Midway through 2010, the GOP won 63 seats in the House. It was the biggest change since the Truman administration, and President Obama frankly acknowledged the “bombÂ» that he had received from the electors. But again, the reaction in some media circles was to sneer.

Expect something similar if the predicted “red tsunami” actually materializes in November. Insults against Republicans and Conservatives, as well as warnings of the horrors to come if they prevail have been a regular feature of mainstream journalism for as long as I can remember. And for as long as I can remember, both Republicans and conservatives have resented and condemned the unfair coverage of their candidates and their causes by mainstream media.

Donald Trump, of course, made this resentment and condemnation a signaling function his political personality, calling the press â€œthe enemy of the American peopleâ€; relentlessly mocking journalists and the media as “failing”, “dishonest” or “terrible”; and denigrating as “fake news” any coverage he disliked. Many of Trump’s animadversions were ridiculous and crude, but there’s no doubt that in elite media circles he and his supporters were deeply hated – just as conservatives and Republicans had been hated in those media circles long before Trump does not enter the scene.

Now the bitterness towards what Sarah Palin called the “lame mediabecause his anti-conservative bias has been absorbed into the ideological DNA of the Republican Party. In 2017, National Review editor Rich Lowry noticed that “the media has become for the right what the Soviet Union was during the Cold War â€“ a common and unifying adversary of overwhelming importance”. Five years later, I have the impression that the conservatives are more exasperated than ever by the liberal media. The irony is that liberal media bias has never been greater.

Really, how much did that ever matter? For all those of us on the right have decried or dissected the anti-Republican hostility that flourishes in the newsrooms of The New York Times, NPR, or the big three broadcast networks, this hostility has never been particularly strong.

Intense media animosity, after all, did not prevent Trump in 2016 from winning the GOP nomination and the general election. The press vilified Richard Nixon and Ronald Reagan, but both were elected to the White House and then re-elected in massive landslides. Newt Gingrich and the House Republicans’ “Contract with America” â€‹â€‹were ruthlessly skewered in the media, but that didn’t stop the historic GOP victory in 1994. During Obama’s presidency, Republicans were flooded with negative coverage. Yet those were the years when Republican pickups at all levels of government left the GOP stronger than it had been in 80 years. And despite being chastised by the media for offenses ranging from ‘voter suppression’ to defending filibuster to opposing Roe vs. Wade, Republicans appear to be heading for another triumph. history at the polls.

Like the Wizard of Oz, the mainstream media isn’t as big and powerful as its reputation dictates. Frankly, how liberal can the â€œmainstreamâ€ be in an era when Fox News is the most watched cable news channelwhen the conservative Daily Wire news site goes far beyond every other publisher on Facebook, and when Ben Shapiro’s podcast is consistently ranked among the most popular in the United States? There was a time when the liberal-dominated media in this country had something like a monopoly on national news and commentary, but those days are long gone. “The talk radio revolution launched by Rush Limbaugh and the rise of Fox News”, Jonah Goldberg recently noted“can only be understood as a rebellion against the hegemony â€“ real or perceived â€“ of the liberal media”.

This rebellion succeeded. He did this not by making legacy media more conservative – if anything, mainstream news outlets are more left-wing than ever – but by creating a parallel media universe that leans well to the right and attracts a vast public of its own. Like so much else in America these days, the media is deeply polarized. The Liberals have their media; the Conservatives have theirs. Our society would be healthier if Americans shared more in common, or if journalists operating in echo chambers of right and left had more respect for those with a different worldview. In the meantime, supporters on both sides can complain about media bias. And if reporters don’t like how an election goes, well, there’s always another one on the horizon.