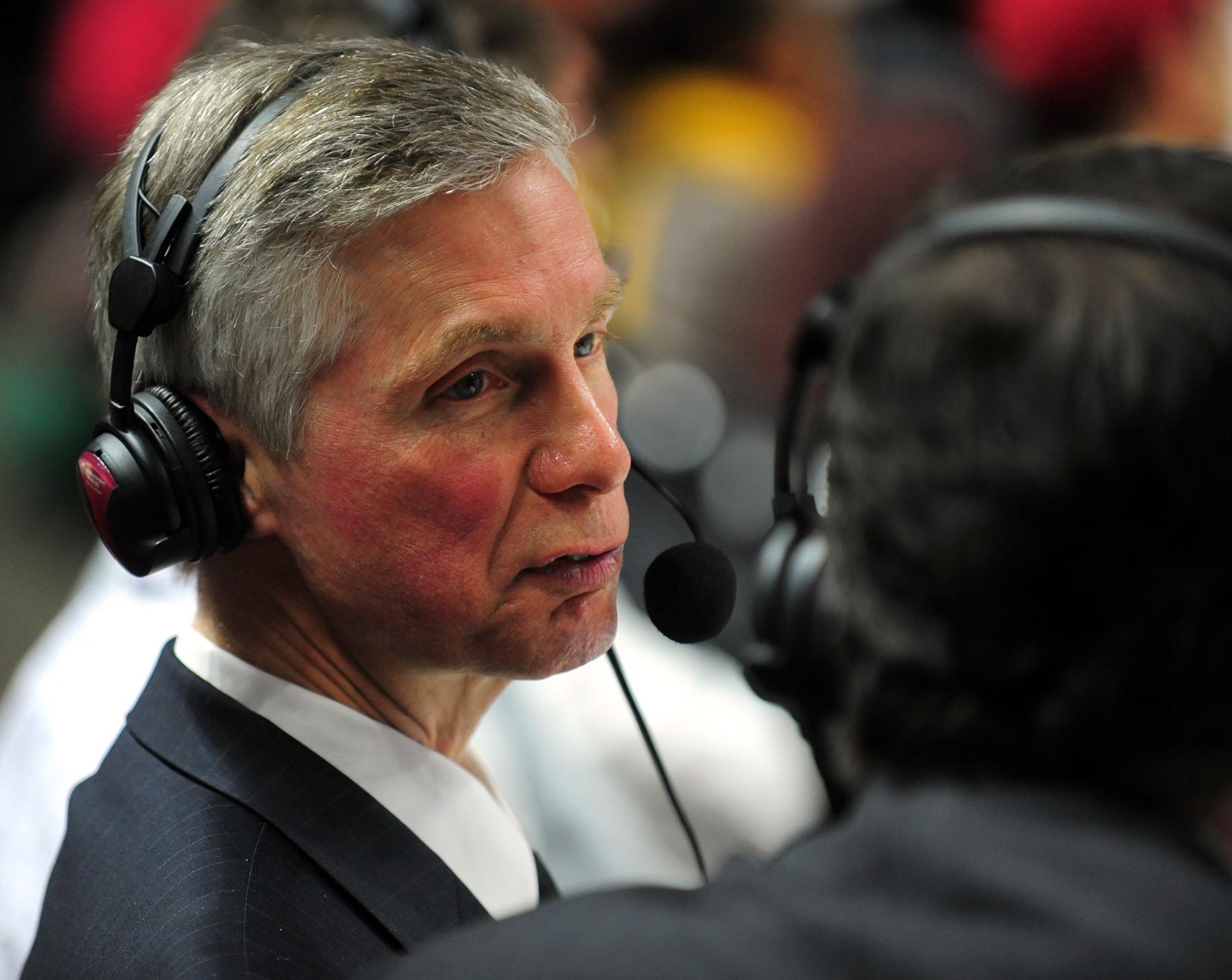 Hours before the last full-time shift of his 30-year career at WFAN last Thursday, Bob Heussler surveyed a changing media landscape and joked that he will one day have to explain radio to his grandkids. .

“Let grandpa tell you how awesome it was,” Heussler said.

Wouldn’t you agree to that?

From making one of the most famous play-by-play calls in Connecticut sports history to serving as the thread of a sports talk show that redefined a medium, Heussler lived the dreams of a childhood gone by. with a transistor radio under his pillow.

The quintessential tri-state guy, Heussler was born in Brooklyn and raised mostly in New Jersey before making Connecticut and New York sports his life’s work.

Heussler, 66, who lived in Hamden for most of his adult life before moving to Stamford several years ago, has stepped down as a full-time update presenter at The Fan. He will continue on a part-time basis and in November will begin his 35th season as a play-by-play announcer for the Fairfield men’s basketball team.

So Heussler is not done. He’s just making things up.

“It’s a major life change in that, for 45 straight years, not only have I never had a full-time job, but much of that time I’ve worked multiple jobs,” Heussler said. “I’m not saying it’s something you can be proud of, that you center your life largely around the jobs you do, but it was the reality.”

For years, Heussler shuttled to WFAN studios in Astoria, Queens, and later Manhattan.

“Madness, in retrospect,” he said.

That’s not to say he didn’t like it, listening to Mike Francesa and Chris Russo on his way home, working with them and others on the air during his shift, listening to Joe Benigno or Steve Somers on the way back.

But over the past two years, while working from home due to the pandemic, Heussler decided his commuting days were over. WFAN decided last month to bring all update anchors back into the studio. Heussler thinks the only thing worth fighting for in city traffic is the occasional Mets game.

“I don’t embellish to say I’ve done enough miles, either by car or by train, for five people,” he said. “So I change gears, and I have nothing to complain about.”

Heussler came and went from New York each day as he went back and forth for his updates during WFAN’s signature program, Mike and the Mad Dog. He was the calming presence of the news every 20 minutes for a show full of emotion and turmoil. However, Francesa and Russo playfully ribbed Heussler, drawing on the personality and emotion he used so effectively as a play-by-play voice on their afternoon driving show that established the standard for sports radio.

“I got to be part of the greatest sports radio show that ever existed and probably will be,” Heussler said. “Without Mike and the Mad Dog, and then later Mike solo, I would be just another radio update presenter. I pretty much stayed in my lane for 30 years. But these two guys liked to break me because, I guess, they liked me.

Heussler, a graduate of the University of Bridgeport, has worked at numerous Connecticut radio stations, in a variety of roles. He was the Connecticut Radio Network’s UConn men’s basketball play-by-play announcer for three seasons, beginning in 1989-90’s The Dream Season.

Which means, of course, he was commissioned to portray the longest running and most famous basketball second in state history. It was March 22, 1990, in East Rutherford, NJ

And the Huskies will have exactly one second left in this ball game to try and pull off a miracle – there’s only one second left. Burrell takes the ball, looks for a drive in, loops it way upfield for George, who catches it, turns around, shoots and…HE GOT IT! HE HIT HER ! HE TICKED IT AND THE HUSKIES WON IT! THE HUSKIES WON IT! GEORGE HIT THE RIGHT SIDE OF THE LANE! AND UCONN WINS IT 71 TO 70!

For UConn fans of a certain age, some or all of those words are etched in the memories of a season that paved the way for all that would become UConn basketball.

“What I appreciate is that this call has stood the test of time,” Heussler said. “I came home that night thinking ‘Man, did I cross the line?’ Thirty-two years later, I understand why it works.

” Field. The emotion. I think my voice speaks to how desperate the situation was in the space of as long as it takes to throw a 90-foot pass and hit a buzzer-beater. In that quick millisecond or two or three, my voice goes from desperation to elation. Somehow I managed to get into some detail, which I’m grateful for.

Heussler, longtime announcer and public relations coordinator at Milford Jai Alai, was the play-by-play announcer for the Connecticut Sun’s first 17 seasons after the franchise moved to Uncasville from Orlando. He began calling Fairfield games during the 1983-34 season, giving it up first to help his late wife, Marcia, who died of cancer in 2011, raise their two sons and take them back after a three-year stint on UConn.

He called Brooke Wyckoff’s 3-pointer that sent Game 2 of the 2005 WNBA Finals against Sacramento into overtime.

His favorite moments with the Stags include the 1997 run to the MAAC Championship and North Carolina’s near upset of Vince Carter in the first round of the NCAA Tournament, and a 2007 buzzer-beater from Mike Evanovich that sent a CIT road game. against George Mason. in overtime. The Stags trailed by 27 points with 16:08 remaining in regulation. They won in OT, 101-96.

“To date, this is the biggest comeback in college basketball playoff history,” Heussler said. “If you think I got fired up on Tate George’s call, that Fairfield game, I’ll tell you, whoa. It was historic. Now people don’t know – the biggest comeback. It was the CIT. It wasn’t the NCAA or even the NIT. But it was something else. And I’ll tell you another person who would remember it well – Ed Cooley.

Heussler began at WFAN on May 9, 1993, six years after the station’s all-sports format began, at a time when updates were a central part of every show, before fans could directly access the world. sports from their phone. Now he is part of this first wave WFAN coming out, one after another. Russo left WFAN in 2008 while Francesa remained. Over the past few years, so many original voices have left – Francesa, Somers, Benigno, John Minko, Ed Coleman and now Heussler.

“You hear from listeners, ‘Oh, that’s not the same,'” Heussler said. “Well, of course not. It can’t be the same. It’s not supposed to be the same. For anyone who thinks it’s not as good, it’s a new era for a new audience. It’s clearly the next generation.

Called “Mr. Met” by Francesa and pushed and prodded by Russo on all sorts of topics, Heussler often saw his updates, or flashes, cut short. .

Heussler has been broadcasting for the past two years from “WFAN Stamford,” what he calls his home studio, during the pandemic. Its route was cut from the confines of the New York metropolitan area to just a few coins away. It will populate WFAN, Updates and Nets games here and there when needed.

“I just consider myself very lucky,” he said. “I was able to take two of the great passions of my life, sports and radio, and put them together and make them work. Radio is the most personal of connections. If you’re a good broadcaster, you make that personal connection. with the listener, unlike TV, where the pictures tell the story. The TV host provides the captions. But on the radio, you are the picture. It’s almost as if the palette is the medium and that you must provide all the color.