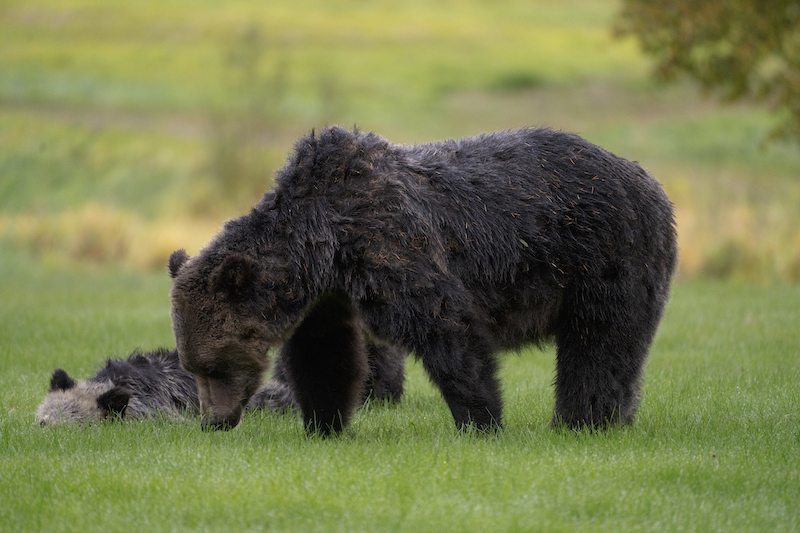 The rainforest stretches from Discovery Island in the south to the BC-Alaska border in the north. It is home to millennial western red cedars and 90-meter-tall Sitka spruces. In addition to the abundance of wildlife, there were several different species of salmon, wolf and bear, hence the name.

Due to its ecological importance, many environmental groups have fought to protect the land, which was once threatened by logging. In 2016, the government of British Columbia announced an agreement to permanently protect 85% of old-growth forest area. But despite this big step forward, the Great Bear Rainforest still faces natural threats that are increasingly of concern to the wildlife that inhabit this place.

And that’s why MÃ©tÃ©oMÃ©dia went to Bella Coola, right on the edge of the rainforest. We wanted to know more about this amazing land and why we need to work together to protect it more than ever. We also had the chance to meet one of the area’s most abundant residents: the grizzly bear. The Canadian grizzly bear population is estimated at approximately 26,000 bears. More than half of the bear population lives in British Columbia, and in the Great Bear Rainforest you can find around 1,400.

We were fortunate to see bears in the natural environment while visiting the Tweedsmuir Park Lodge in Bella Coola. Every day, we explored the region on foot or by a river, learning all about the bear’s behaviors, its culture and, of course, its interaction with nature.

Ellie Lamb is a wildlife guide at Tweedsmuir Park Lodge, and her passion is helping guests understand these animals.

â€œThe biggest challenge grizzly bears are our own fear, as humans, of grizzly bears,â€ Lamb explained. â€œWe have to understand that these are extremely evolved animals. They have a community. Their mothers teach them where to hunt and who to trust. They have a culture and traditions. They have a social structure. They are amazing animals and by bringing people out and allowing them to experience the world they create, it will allow us to better understand them and want to take care of them.

While we were in the rainforest, we met the same family every day. A mother, known in this field as Perfect, and her two cubs. It was an incredible experience to be able to observe these bears for several days. She seemed to trust our guide Ellie and would allow us to get close enough. We got to see how she interacts with her cubs and some of the hunting and feeding skills she was teaching her cubs and some of her unique behavior patterns.

During the days in the rainforest, the guides also taught us more about the home of the grizzly bears. They pointed out features such as scrub trees, which are used for communication, comfortable places where they build nests for naps, and the remains of unearthed wild carrots. But our walks also unveiled some more concerning features.

From the edge of a river, we saw an individual, Perfect, trying to catch a salmon for her and her cubs. I asked Lamb about this year’s salmon comeback and she told us it wasn’t great.

“The pink run was extremely low and the chinook and ‘king’ salmon weren’t very good either.” Lamb worried about Perfect and her cubs. They were late to hibernate this year and there weren’t a lot of fish around. They were trying to find alternative food and even came to the lodge feasting on weed. This year, Lamb had also seen familiar females who had cubs last year come back solo, meaning the babies didn’t survive the winter.

In the 1970s, the Canadian government opened the Snootli Creek Hatchery in Bella Coola in an attempt to rehabilitate the chum population. It is currently undergoing a $ 20.4 million renovation over five years to modernize infrastructure and improve operations. And while there has been some support for some species of salmon, others continue to suffer in the region, and as the climate changes and the waters warmer, the situation is only getting worse for the salmon, and therefore also for bears.

Grizzly bears have been forced to adapt. Before hibernation, bears need to put on weight, typically eating 90 pounds of food a day ahead of time. Some bears turned to other food sources like berries and carrots, while others decided to travel greater distances in search of salmon.

Unfortunately, some bears have roamed residential communities in search of food. Although grizzly bear hunting is banned in British Columbia, each year several bears are killed due to human conflict.

The reason these signs are so concerning is that grizzly bear populations can decline rapidly, as they are one of the slowest breeding land mammals. A female may have only 8 young in her 25 years of life. They are currently considered a species at risk.

In hopes of finding ways to protect bears, the Tweedsmuir Lodge team worked with a group of researchers from the BearID Project. Over the past few years, they’ve been working on new and innovative technology like facial recognition that can monitor bears, track threats in their environment, and track their health, to hopefully keep the grizzly bear population out of the forest. Great Bear Rainfall. prosperous.