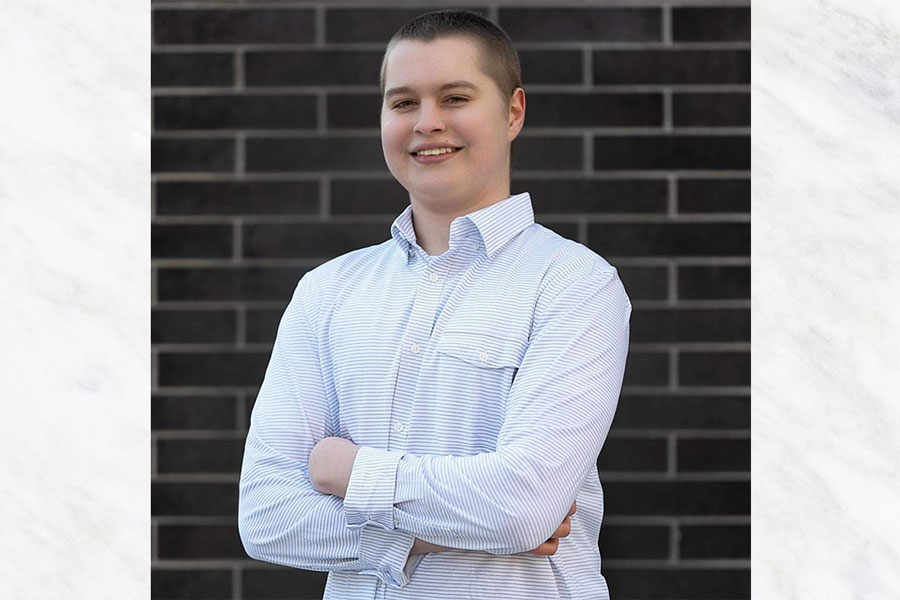 Kenowa Hills –Senior Jestin Schulte remembers his freshman year of high school as the last “normal” year he had.

Not only did the Class of 2022 spend part of their sophomore and freshman year learning virtually while dealing with canceled plans during a global pandemic, but Jestin faced another battle of resilience when he was diagnosed with osteosarcoma, a rare bone cancer, halfway through his junior year.

“I’ve had growing pains in my leg all my life, and when I was 16, (my doctor) told me I shouldn’t have it anymore,” he said. “We didn’t know what it was, but we found out it was something in my bone. After a biopsy, I was diagnosed with bone cancer in February 2021.”

On June 16, 2021, Jestin underwent what he called “massive” surgery to replace his femur. As part of his recovery, he walked on crutches for six months and received physical therapy twice a week.

His student life changed when he traded the classroom for his bedroom and his classmates for his parents. Pandemic restrictions have also prevented friends and family from visiting.

“It was hard to be home alone with just my parents at first, but eventually the restrictions opened up where my friends could come,” he said. “We talked and played video games to occupy my mind.”

When he felt like it, Jestin and his friends would also go fishing in the nearby lakes and ponds.

Friends were instrumental in making sure he got his schoolwork done and that his teachers were supported and worked with him to navigate learning from home. A teacher even sent her a box of candy after learning of her diagnosis.

“I was a bit worried about falling behind, but the teachers helped me and I carried on as best I could,” he said.

Spencer Vanderheide, a special education teacher at Kenowa Hills High School, described Jestin as “the definition of resilience” and “a selfless and giving young adult.”

“In addition to our world fighting a collective battle over the past two years, Jestin was fighting his own,” Vanderheide said. “I appreciated how open and honest Jestin was about his healing journey. He has already used his story to encourage others in our class to keep fighting and keep going. Kenowa High School Hills is definitely a better place thanks to him.

“Jestin entered the battle with the attitude he was going to win. He attacked cancer and yet his spirit of kindness and grace remained intact throughout,” Lyons said. is good in the world.”

“What I went through was tough, but (it) made me mature faster and taught me how to live life, spend quality time with my friends and family, and that the little things matter more than the big ones.”

Jestin’s battle continued, with chemotherapy through the summer before his senior year and through the fall semester.

“The chemotherapy treatments were treacherous,” he explained. “I was bouncing between school and treatment and going from Thursday night to Sunday in the hospital. Sometimes I had to stay longer if I wasn’t feeling well.

Getting McDonald’s for dinner on Thursday night, he said, served as a silver lining for pain, discomfort and nausea.

In addition to his teachers, Jestin said he was grateful to the doctors and nurses who cared for him during his surgery and hospital visits, as well as to principal Nate Robrahn and Randy Barber, his trainer. lacrosse since seventh grade.

Back in the field

A long-time mentor when he was a senior, Jestin said his coach supported him every step of the way.

“Coach Barber is an amazing lacrosse coach, and when he heard about my cancer, he became even more supportive and someone to talk to and look up to,” he said. “He was there for me and stayed in touch throughout my treatment process during and beyond our lacrosse season.”

Jestin’s teammates too create and sell t-shirts to help the Schulte family with medical expenses.

Towards the end of his freshman year, support came from beyond Michigan when Jestin received a call from HEADstrong Foundationa Philadelphia nonprofit created by a college athlete with terminal cancer to raise awareness and funds.

The organization sent merchandise and helped arrange a tour of the University of Michigan lacrosse facilities and for Jestin and his parents, coach and a few teammates to attend a practice.

Nearly a year after his diagnosis, the Schulte family met with Jestin’s doctors to discuss his most recent scans.

“It was the best news in the world when they told me I was in remission,” he said. “My parents were excited and my mother cried.”

“My run looks weird and I haven’t played much, but I still had some playing time and I need to be back with the team,” he said.

Principal Robrahn chimed in, “Did he tell you he scored a goal in his last game?” We had some tough times, but he kept showing up and we’re still proud of (him).”

Jestin is heading to Grand Valley State University in the fall with the goal of eventually pursuing a career in medicine.

“Going to school will move me forward in life and away from the madness of COVID and chemo,” he said. “What I went through was tough, but (it) made me mature faster and taught me how to live life, spend quality time with my friends and family, and that the little things matter more than the big ones.”