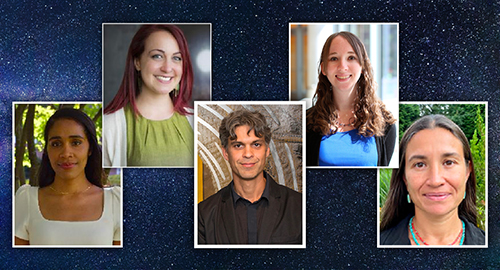 A new STEM mentorship network seeks to maximize scientific excellence and output within the astronomy and astrophysics community by cultivating inclusive environments where people with marginalized identities can thrive.

Funded by the Heising Simons Foundation, the network—Unsolved Problems in Astrophysics: A Network to Revolutionize Our Understanding of the Universe Through Inclusive Workplaces and Fair Practices— aims to create spaces for professors and graduate students to create cutting-edge science, says Enrico Ramirez-Ruiz, professor of astronomy at UC Santa Cruz. He is part of the group of astronomers and astrophysicists who bring a wide range of scientific expertise and educational approaches to the network.

The network crosses institutional boundaries and establishes a formal support structure for teachers from historically marginalized communities in STEM, with the goal of pushing science toward excellence. Each scientist brings unique expertise to the network, allowing members to collaborate and co-mentor students, ultimately bringing new and creative ideas into unresolved areas of astrophysics.

The network is the first significant and sustained effort of its kind in the field of astronomy and astrophysics. This goes beyond current efforts to diversify the field, with the understanding that improving workplace experiences greatly increases the creative output of the workforce and therefore impacts scientific excellence in its together.

The network was inspired following a national decadal survey panel, co-chaired by Ramirez-Ruiz, which looked at the investment of human capital in science.

“For the first time in the history of the field – perhaps in the history of science – the Decade Survey has created a panel, the State of the Profession Panel, to examine not only how agencies are investing in software, hardware, equipment, but how they have to invest in people,” says Ramirez-Ruiz.

“We’re never going to be truly scientifically excellent until all the voices are at the table,” he says.

Catherine (Kate) Daniel associate professor of astronomy at the University of Arizona and associate astronomer at the Steward Observatory, was a key member of the panel along with Ramirez-Ruiz. She highlighted the importance of mentoring networks, noting that they have been shown to more effectively support students and scholars at all stages, in terms of retention, sense of belonging and recognition.

“In a way, the panel itself demonstrated how a support network and a truly diverse set of thinkers can achieve something really new and impactful,” says Daniel. “It is our very composition that created the generative and innovative atmosphere that allowed us to write a report that I am very proud of.

Daniel has has received several awards, including the appointment of the first Vera Rubin Distinguished Visiting Professorship at UC Santa Cruz (2021), a Scialog Fellow (2019), and an AAUW Fellow (2015). In 2020, Daniel co-founded the Society of Indigenous Physicists. Daniel is one of a handful of astronomy professors around the world who are of Indigenous ancestry.

The professors participating in the network have proven themselves as research advisors and have already built, as a model for the more formal network, spaces for creative co-collaboration and co-mentoring which have led to the training of students in an approaching novel.

Lopez and Ballard’s co-mentorship provided Rodriguez Martinez with the opportunity to interact with professors with a variety of expertise, giving him the opportunity to develop interdisciplinary projects and enhance his future scientific and professional potential.

“Serving as a mentor has the potential to help early career professionals see what’s possible,” says Ballard. “By serving as influential guides, we can help them find their place in astronomy and provide support so they can do transformative work in the field.”

Ballard earned his undergraduate degree in astrophysics at UC Berkeley in 2007, before attending Harvard University for his Ph.D. She was a NASA Carl Sagan Fellow at the University of Washington where she did postdoctoral work and received a Women in Science Fellows Postdoctoral Fellowship from L’Oréal USA to continue her research at MIT. She was involved in the discovery of four exoplanets before she was 30, including Kepler-19c, the first exoplanet found using the transit time variation method on data from the Kepler assignment.

Lopez was Ramirez-Ruiz’s first graduate student, completing her doctorate. at UCSC in 2011. She received the prestigious 2022 award Early Career Award from the High-Energy Astrophysics Division (HEAD) of the American Astronomical Society, awarded for a significant advance in high-energy astrophysics. She is also the recipient of the Annie Jump Cannon Award from the American Astronomical Society (2016).

Lopez is grateful for the mentorship support she received at UCSC and credits the university and Ramirez-Ruiz for launching her career. She hopes the network will help transform the culture within academia and science.

UCSC as a model

UC Santa Cruz’s astronomy program is one of the most diverse in the country – over 30% of the department’s Ph.D. students come from historically marginalized communities. Ramirez-Ruiz highlights the important role the network can play in providing a formal support structure for graduate students, providing access to role models who have similar lived experiences.

Nia Imara is an assistant professor of astronomy and astrophysics at UC Santa Cruz.

“I am grateful to be part of such a creative and innovative network of scientists who are also actively working to achieve equity in academia,” Imara said.

Ramirez-Ruiz says UC Santa Cruz should celebrate the work it has done to attract students of color. Now, he says, it’s time to create effective support structures for students and faculty.

Ramirez-Ruiz thanks the Heising-Simons Foundation for its vision and support.

“The Heising-Simons Foundation is thinking about how it catalyzes the creation of such transformative support structures,” he says. “I would like to pay tribute to the Heising-Simons Foundation for not just thinking about what is out there and not just recreating what already exists, but really creating a structure that emanates from the needs of professors and students of color,” says- he. .

The network will be coordinated by the Center for the Advancement of STEM Leadership at UCSC. The center is dedicated to creating workplaces and learning environments that reflect our values ​​of equity and enable all of our nation’s and the world’s human diversity to contribute meaningfully to the fields of science, technology, engineering and mathematics (STEM).

Founding members of the network

For more information about the network and how you can support students and faculty of color, contact Deana Tanguay, Executive Director, Center for the Advancement of STEM Leadership, [email protected]

The Chinese manufacturer announces 300 orders for a new airliner