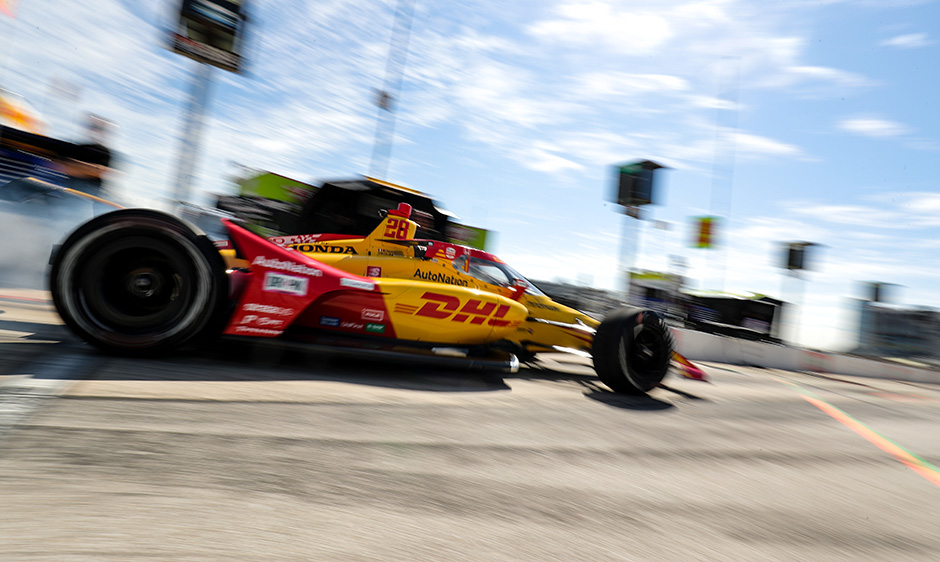 New aero part options should tighten the field in Texas

When the NTT INDYCAR SERIES races the 1.5-mile oval at Texas Motor Speedway on Sunday for the XPEL 375 (12:30 p.m. ET, live on NBC and INDYCAR Radio Network), two new aerodynamic parts will be available for use on cars, with the aim of improving racing conditions for fans and drivers.

These new parts – the barge board and trim sidewall – are intended to help the cars track better with less impact from the dirty air produced by the car in front. Both pieces are optional this weekend, not mandatory.

The barge board, a curved, plate-like piece of carbon fiber located on the leading edge of the lower wing, will create forward downforce with the lower wing. This helps reduce the angle of the front fender, which can prevent the car from washing out when cornering behind other cars. The cut sidewall option will also produce downforce under the wing.

Tino Belli, INDYCAR Aerodynamics Development Manager, said that in seeking to help the NTT INDYCAR SERIES cars ride better in traffic, the combination of these two parts was selected to help keep the car balanced for the front-back support.

Additionally, Belli said the biggest motivator for allowing these options at TMS is response to feedback via fan polls and sync and rating metrics. He said INDYCAR expects these parts to create closer racing and improved passing ability, but they will not replicate the close pack racing that was once commonplace in Texas.

“We follow what the fans want,” Belli said. “We can see from all of this data what fans like and dislike, and it fits pretty well. So we’re monitoring all of that, and trying to make the competition as good as possible without creating pack races, because it’s not safe.

Although both of these parts are new to TMS, they are not new to the NTT INDYCAR SERIES. Both pieces were tested last year in Texas and made available as options at the Indianapolis Motor Speedway for the 105th race of the Indianapolis 500 presented by Gainbridge.

Belli said 32 of the 33 teams entered the race with these parts. Ricky Davis, chief mechanic for Alex Palou’s No. 10 NTT DATA Ganassi Racing Honda chip, said his team didn’t use the barge board in last May’s race en route to second place. from Palu.

The quality of racing on the 2.5-mile IMS oval with these parts used by most teams convinced INDYCAR that they were worth considering for the XPEL 375, Belli said. And in testing last week in Texas in preparation for this weekend’s race, early data showed positive results.

Tim Broyles, president of Ed Carpenter Racing and strategist for Conor Daly’s #20 Chevrolet BitNile, said ECR was optimistic about what he saw on the track last week and expects optional parts improve car handling in traffic.

Davis, who led Palou to the NTT INDYCAR SERIES Championship last season, believes the cut sidewall will be the biggest help in allowing drivers to set up and complete passes. Combined with the barge panel, it is agreed that the combination will produce better driving conditions in traffic at TMS.

“Theoretically in race setup it should help keep the front end more planted,” Davis said. “I think it’s going to help us get closer.”

Belli, Broyles and Davis all noted that because this weekend’s event is not a pound race, teams will be able to tune their cars for qualifying to produce more speed. This means teams are unlikely to run the barge board in qualifying.

But at race time, Belli said he expects the 27 teams to use the combination of those two parts to set up passes and move around the field better. And he thinks fans will be rewarded with a better show because of them.

“We want the cars to perform, but we want them to be safe,” Belli said. “We are pretty sure that the pilots will be able to follow more closely. That’s certainly the feedback we got.

NTT INDYCAR SERIES action in Texas begins Saturday with practice at 10:45 a.m. ET, followed by qualifying at 2 p.m. ET. There will be a special practice session at 5:00 p.m. ET to help lay down the rubber in the second groove of the turns before the final practice at 5:45 p.m. ET. The entire Saturday session will be live on Peacock Premium and INDYCAR Radio Network.

This Sunday, Join the Scientology Network for the International Day of Happiness | News