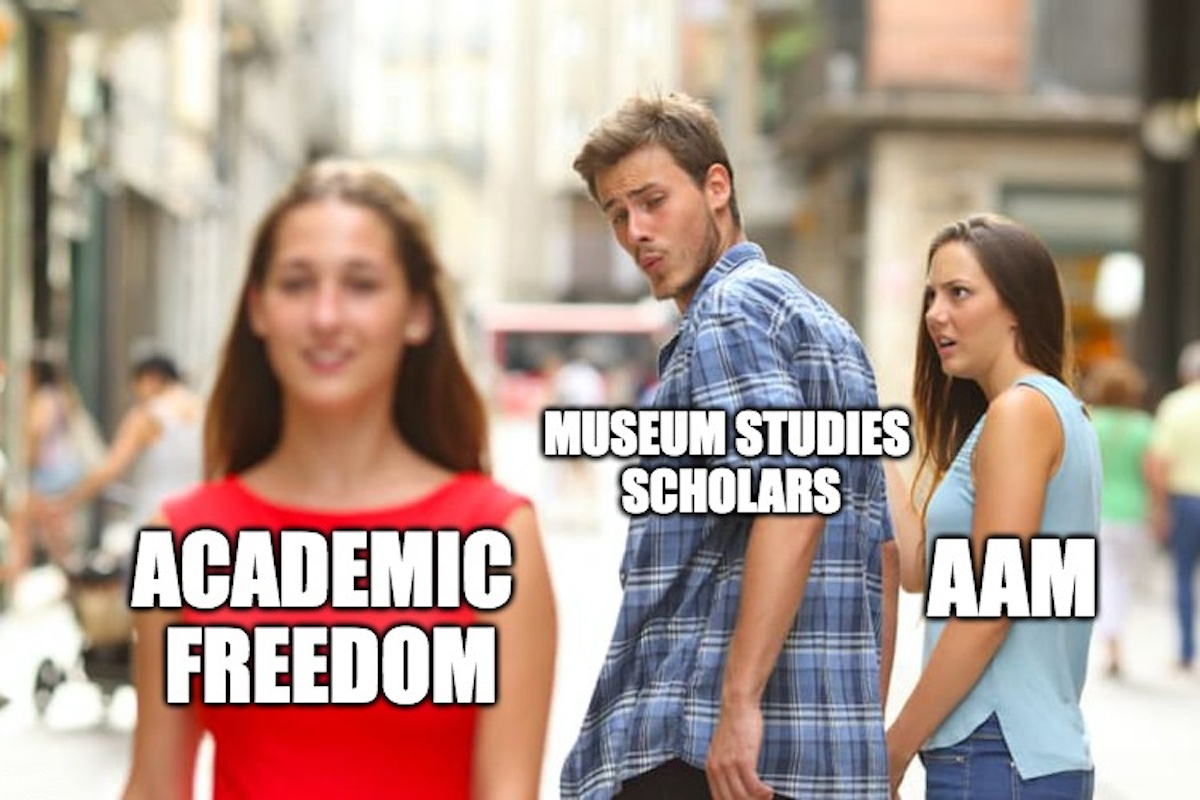 A committee of American Alliance of Museums (AAM) volunteers voted unanimously to resign from the organization’s Museum Studies Professional Network (MSN) after its president was asked to sign a code of ethics which required “loyalty” and limited public criticism of the AAM.

MSN’s six-member steering committee, made up of professors and directors of museum studies programs at universities across the country, said in a public resignation announcement on Facebook that they have an “ethical duty” to their field and to students above the AAM, and band members told Hyperallergic that the code violated their academic freedom. The leaders released the announcement last Friday, October 28, four days after sending their collective resignation letter to the AAM.

In response to Hyperallergic’s request for comment, an AAM spokesperson sent the following statement: “The AAM supports academic freedom and the freedom of expression of individuals. A “duty of loyalty” and a “duty of compliance” are standard elements of a nonprofit’s code of ethics for its volunteer leaders, who often have access to sensitive or confidential information, or the power to speak or make decisions on behalf of the organization. »

“We understand that this document may not be something everyone is comfortable signing, and we respect the former leaders’ decision to step down and appreciate their contributions,” the statement said.

MSN is part of the AAM’s Professional Network program, a group of 20 volunteer committees that provide a space for museum professionals to share ideas about their fields. They include committees dedicated to curatorial work, collections stewardship, media and technology, security, and other areas. MSN meets at regional and national AAM conferences, and it had about 1,000 members in 2020, though not all of them are active.

This was the first time the AAM had asked its Professional Network (PN) leaders to sign a code of ethics. The AAM conducted an external review of the program this year, the results of which are being finalized, which concluded that these committees should be governed by the same legal structures that preside over the general organization. Part of this legal structure involved having committee leaders sign a code of ethics based on that of the AAM Board of Directors.

MSN executives challenged several clauses in the document, including a section titled “Duty of Loyalty,” a “legal obligation [that] requires that a Professional Network Leader places the interests of AAM above other personal and professional interests.

“Our loyalty is to the students,” Mickey Maley, MSN manager and director of the museum studies program at the University of the Arts in Philadelphia, told Hyperallergic.

Beyond the loyalty clause, however, MSN executives have been reluctant to sign other provisions, including a section under “Duty of Compliance” that required professional network executives to “avoid criticism outside of the ‘AAM the policies and decisions of the PN or the AAM or any member of the board of directors, officer, staff member or PN official of the AAM. Laura-Edythe Coleman, an MSN executive who directs the arts administration and museum leadership program at Drexel University in Philadelphia, described the provision as a “gag order.”

Jennifer Kingsley, MSN secretary and director of the Museums and Society program at Johns Hopkins University in Baltimore, Maryland, said signing the document would have limited her academic freedom to pursue research and scholarship. Given the ethical conflict between her scholarship and student responsibilities and loyalty and confidentiality to the AAM, she felt she “had no choice but to resign.”

Maley explained why the clause was a problem for the Museum Studies PN in particular, which has the distinction of being made up of educators. He said the free exchange and critique of ideas is essential for the entire museum field, which needs constructive critique to grow and foster discourse.

Kingsley said she was currently inclined to work informally with her colleagues and there was no logical, perfect solution for where museum studies managers should go. However, she pointed to the National Emerging Museum Professionals Network (NEMPN), a former AAM professional network that has since branched out, as an option. The NEMPN does not have an AAM-style code of ethics and, among other advocacy efforts, it now campaigns for pay transparency in the industry and for the abolition of unpaid internships. Kingsley also mentioned the National Council of Public History as another potential home for his group.

“Academic freedom and freedom of expression are key tenets of the pulpit,” Coleman told Hyperallergic. “I think I have a duty to speak out publicly when our institutions fail us.”

I haven’t received any communication from the government about the conversion into shares, says Vi