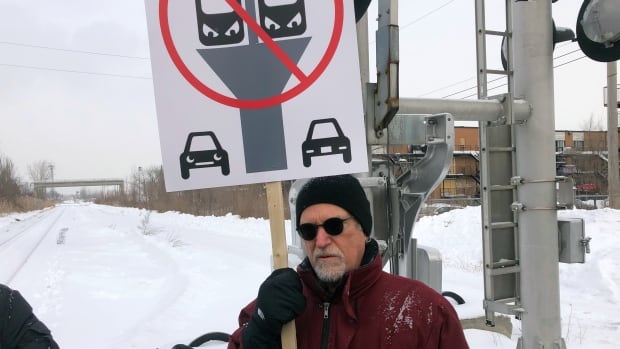 Ronald Daigneault was one of the residents of the east end of Montreal who adamantly opposed the construction of a light rail route along Sherbrooke Street.

Thus, after numerous outcry and concerns about the feasibility of the project, CDPQ Infra, the contractor in charge of building the Metropolitan express network (REM), moved a 4.5 kilometer section of the track several blocks south.

From now on, the massive concrete structures that hold up the railway, measuring up to 12 meters high, will be directly opposite Daigneault’s house on Avenue Dubuisson – built on a grassy railway corridor separating Dubuisson from the Avenue Souligny.

“Yes, there is a railway here, but it’s used every other day or so,” he said, noting it was once a day when he first moved in. in the area, but still nothing compared to the frequency promised by the REM, which runs every few minutes for most of the day.

Holding a sign protesting the new plan as he spoke to reporters on Tuesday, Daigneault said the project had no place in his neighborhood.

“It’s not a project for people,” said Daigneault, who is with the VSohlective in the Mercier-East environment group of citizens.

He would like to see the REM moved further north, along Highway 40 instead – away from densely residential areas.

As it stands, he said, the project looks less like mass transit that serves the population than a business proposition aimed at generating profits for well-heeled investors and property developers further afield. ballast.

Quebec’s pension fund manager first announced the light rail network in 2016, and construction of the electrified train is well underway in areas like the West Island, Central -city and the South Shore of the city.

the Caisse de depot et placement du Québec bears most of the initial costs and will collect revenue. But when the Caisse announced it was heading east with the project, along arteries like Notre-Dame and Sherbrooke streets, opposition quickly blossomed with petitions and protests.

An aerial structure was being considered for Sherbrooke Street between Honoré-Beaugrand Street and Georges V Avenue, but CDPQ Infra announced Tuesday that Canadian National had agreed to sell the Souligny rail corridor right-of-way on December 30.

This plan will allow the REM to reach people along a more distant stretch of the metro’s green line, offering two stops along the route, according to project officials.

“We are working very hard with a committee of experts to ensure that this structure will fit well into the community,” said Virginie Cousineau, spokesperson for CDPQ Infra.

This new solution responds to concerns raised about construction on Sherbrooke Street while creating an “opportunity to better serve the residents of Tétreaultville, who currently do not have access to sufficient public transit,” said Christian Ducharme, Vice -president of engineering at CDPQ Infra, in a report.

According to him, CDPQ Infra is constantly looking for ways to adapt to the needs of the community while maintaining the technical and financial viability of the project.

Go in the right direction, says the mayor

But the new location means the likes of Marc-André Dupuis will see a towering gray structure topped with electrical wiring every time he looks out his window.

Dupuis said he was worried his children wouldn’t be able to sleep with the REM cars passing about 20 hours a day, seven days a week. Her children’s bedroom is only a few meters from where the structure will be built.

He is also concerned that the construction project, which is expected to take place between 2023 and 2029, and vibrations from passing cars will damage his home and others in the area.

“We won’t have any sun here,” he said. “It does not mean anything.”

Although not everyone is happy, the announcement was well received at Montreal City Hall where Mayor Valérie Plante called it a step in the right direction.

“Obviously, a route via Souligny Avenue will also pose urban integration challenges for which the best solutions will have to be found. We will continue to work in collaboration with the borough and the CDPQ to identify appropriate solutions,” she said in a press release.

“What we want is for it to be integrated in an exemplary way throughout the course while taking into account the needs and expectations of citizens.”