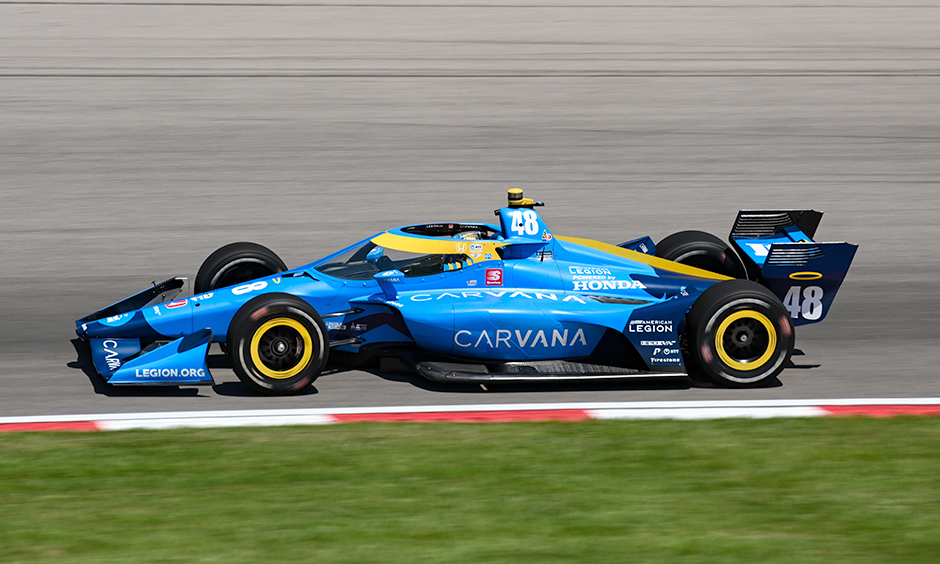 Excuse Jimmie Johnson if he forgot a few races in his decorated motorsport career. He has recorded over 800 stock car starts and now 26 in the NTT INDYCAR SERIES.

So while the seven-time NASCAR Cup Series champion made his way to World Wide Technology Raceway for this weekend’s Bommarito Automotive Group 500 presented by Axalta and Valvoline, he couldn’t remember how many times he ran here. He thought the answer was once, but was told that was incorrect.

“I was in an argument with my social media team,” Johnson said. “(They said), ‘We have these stats that show you’ve been here three times.'”

All three were part of NASCAR’s Xfinity Series, with records showing finishes of 15th in 1998 with Tad Geschickter’s team and finishes of 13th and 14th in 2000 and 2001, respectively, with Herzog Motorsports.

“I remember my first race here, I think, in 1998 or 1999 in (no) 59 Busch, (but) I don’t remember being here the other two times, in Herzog (no ) 92 car, which is kind of weird,” Johnson said. “I remember car 59 because myself, Ryan Newman and Adam Petty were all fighting for that seat. Adam Petty was sitting in the stands looking at me.

Johnson also tested a Cup Series car just before the track was repaved, and he was in a simulator trying out the 1.25-mile oval in NTT INDYCAR SERIES configuration.

Johnson posted his best NTT INDYCAR SERIES results at oval tracks — he finished sixth at Texas Motor Speedway and 11th and fifth in both races at Iowa Speedway — but this track might not suit him as well as those.

“When I look at my performances on oval (in this series), if there are multiple lanes, I seem to be running well,” he said. “Indy is a single-file track, (and) I couldn’t get through and use my experience like I had hoped.

“Last year’s race (at WWTR) was like about 10 or 15 laps where there were a few lanes and then it quickly went single file. Until I was there (for the race Saturday), it’s hard to say.

As part of post-qualifying practice, nine riders invested 30 minutes of driving in the high lane of the track to add track rubber to help develop the second groove. A similar session was offered at Texas Motor Speedway to reasonable reviews, and there were 284 passes for the position.

Johnson also noted that he tested at Iowa Speedway before the doubleheader; this event offered him no such luxury.

“Here I think I’m at 50 laps,” he said after qualifying. “I just need more laps to find my rhythm here.”

As the NTT INDYCAR SERIES returns to action with the Bommarito Automotive Group 500 presented this weekend by Axalta and Valvoline, it would be wise to remember which driver knows the World Wide Technology Raceway as well as anyone. His name is Hélio Castroneves.

From a track perspective, the 47-year-old Brazilian hasn’t heard much this season at Meyer Shank Racing, with his #06 Honda AutoNation/SiriusXM further up the standings than he’d like – he’s 18th after 14 of 17 races. But it’s a track where Castroneves has often excelled, winning the 2003 race and finishing second twice. In six starts at the 1.25-mile track in Madison, Illinois, he has never finished outside the top 10, and that’s with three different teams.

And ovals have also been his thing during his long career, with 16 of his 31 wins at such tracks.

“Very good,” Castroneves said after remembering those facts. “I really appreciate that.”

With a contract extension in hand for 2023, Castroneves is hoping for a milder Saturday night than he experienced when he won 20 years ago. In that race with Team Penske, his car was plagued with an assortment of dash issues—”no info on my dash, to be honest, absolutely blank”—and yet he still delivered.

“Technology helps sometimes, but that day technology didn’t do anything for me,” he said with a laugh. “I remember that even when shifting into high gear, the headlights wouldn’t work. I had to do everything on time – literally the old-fashioned way.

Castroneves has challenged the difficulties of this season to build a base for the team which has moved to two full-time cars this season. Yes, he has had to adjust to the downforce changes created by installing the aeroscreen since he last rode some of these tracks in 2017, the last time he competed in all races in the series. Also consider that this weekend’s event at WWTR is only his second at the track since 2003.

But Castroneves thinks MSR is building something special with him and 2019 series champion Simon Pagenaud, his former running mate at Team Penske.

“Look, I’ll just put it this way,” he said. “When you start a business, (and) learned a bit from Roger (Penske) here, sometimes you start a (car) dealership (and) the first year, you lose money. It’s kind of like that in the racing team.

“Sometimes you form a team (and) even if the team has experience or shares information with another group, it takes time to go through the process, to put everything in place. Some people come and go, so it takes time. You just have to trust the process.

“I am convinced that we will get our deserved result, and I hope that this weekend we will succeed.”

“The Wall of Smack”

WWTR officials decorated the wall at Turn 2, calling it “The Wall of Smack”.

Rossi was asked about the sign and initially tried to downplay it. But he confessed.

“I probably know more because I crashed there,” he said.

Josef Newgarden (#2 PPG Team Penske Chevrolet) said of the signage, “Love it. It could provide an incredibly ironic place to have a wreck. I’ll try not to hit it, (but) I’m sure people would like it if I did.

Princeton cultivates community and relationships for staff in new ways

Crash of a chemical tanker and a freighter near southwestern Japan