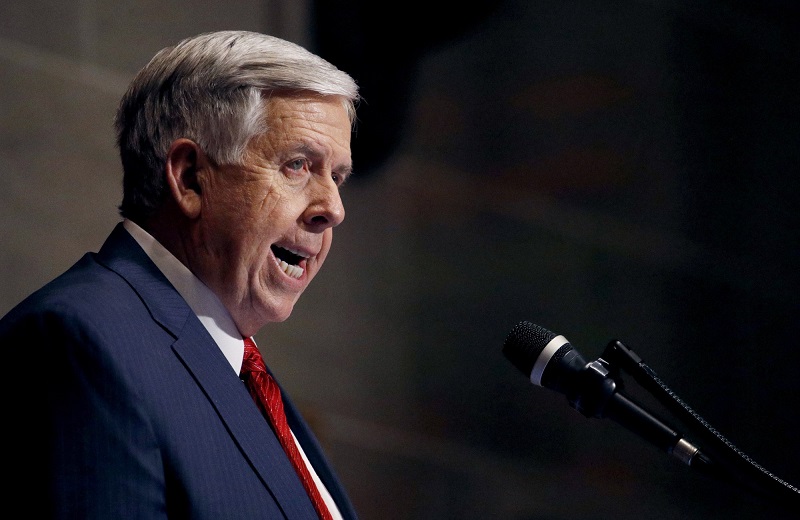 Following a recap of 2021 and Missouri’s bicentennial year, Governor Parson proclaimed that Missouri is strong today and will be even stronger tomorrow.

“With a historic budget surplus and federal dollars flowing into our state, we want to build on our past momentum to seize even greater opportunities for the future of Missourians,” Governor Parson said. “As other states close spending gaps and budget shortfalls, we will make investments going forward, because in Missouri we took a common sense approach to the pandemic, never closed businesses, and have always had a conservative and balanced budget. ”

During his speech, Governor Parson said now is the time to double down on workforce development and build the skills of Missouri’s workforce. To accomplish this, Governor Parson has requested the permanent implementation of the Missouri Fast Track program, $31 million for colleges and universities through MoExcels, and $20 million for the 57 career centers in the state region.

To further support the education of Missouri children, Governor Parson has proposed multiple investments in K-12 education, including fully funding the Foundation formula and increasing the starting salary of Missouri teachers. Missouri at $38,000 a year.

“Last year, 95% of Missouri schools understood the value of in-person learning and did the right thing by keeping their doors open and our children in the schools where they belong,” the governor said. By its. “We know that the vast majority of educators in Missouri succeed day in and day out, and no one in this chamber would be where they are today without quality educators in their lives, myself included.”

Governor Parson also recognized that for Missouri to succeed, the state must recruit and retain talented public servants throughout the state government. To accomplish this, Governor Parson asked the General Assembly to pass an immediate 5.5% cost-of-living adjustment for all state employees.

To build on the state’s past successes, Governor Parson again called for major infrastructure investments, including $75 million for the transportation cost-sharing program introduced by his administration in 2019. , $100 million for low-volume roads across the state, and $400 million for drinking water, wastewater, and stormwater systems.

Additionally, Governor Parson has requested $400 million for statewide broadband expansion projects, the largest broadband investment in state history. This proposal would connect 75,000 homes, expand access to rural and underserved urban areas, and update and expand wireless networks across the state.

To help ensure that the agricultural way of life remains strong and can be passed on to future generations, Governor Parson has requested $10 million to expand agricultural innovation and labor programs.

Additionally, Governor Parson explained that more and more citizens and travelers are taking advantage of Missouri’s great outdoors. To supplement this state asset, expand tourism, and spur small business growth and job creation, Governor Parson has proposed investing $69 million to begin construction of the Rock Island Trail, which will become the largest circular rail-to-trail network in the United States.

The COVID-19 pandemic has further revealed the need to strengthen healthcare networks across the state. That’s why Governor Parson proposed $34 million to increase telehealth and telemedicine services in rural communities and construction of a new multi-agency health lab to increase cross-collaboration for safer Missourians and in better health.

Additionally, Governor Parson called for doubling the capacity of Missouri’s six autism centers to help more families meet the challenges of autism diagnosis and treatment as well as reduce wait times for children. families in need of services.

“We must work to strengthen our communities by supporting our men and women in law enforcement and learn from failed policies in other cities and states to never allow anti-law enforcement measures to take hold. in this state,” Governor Parson said. “In Missouri, we defend law enforcement, not their funding.”

This year, Governor Parson has proposed investing $11 million to improve the Peace Officer Standards and Training (POST) Academies and provide more scholarships for law enforcement officers to receive certification. POST and put more officers on the streets. These investments will aid in recruitment and retention efforts across the state and help keep communities safe.

Governor Parson also directed the Legislature to establish a Cash Operating Expenditure Fund that sets aside 2.5% of general revenue to mitigate budget cuts and provide greater flexibility in times of emergency.

“With a cash fund for operating expenses, we can achieve financial stability when the rainy days come,” Governor Parson said. “It’s the responsible thing to do, it’s the conservative thing to do, and it’s the right thing to do.”

Special Guests on State of the State 2022

During his speech, Governor Parson also recognized special guests for their accomplishments and commitment to the people of Missouri:

Governor Parson concluded today’s State of the State Address by recalling the moment Corporal Jared Schmitz made his last trip home and witnessed the true strength of Missouri: his people.

“When times are tough, Missourians step forward. When someone is down, Missourians pick them up,” Governor Parson said. “The past few years have been difficult and divisive for many people. , but Missourians remain loyal; they give their best; and they always put others first.

“When we look forward and don’t dwell on the past, when we find solutions instead of problems, when we stand together instead of apart, we can achieve anything. We must always keep moving forward in this state because no one is coming to do it for us,” Governor Parson continued. “Missouri is STRONG today and will be EVEN STRONGER tomorrow.”

Scientists discover the oldest social network in the world – ARTnews.com