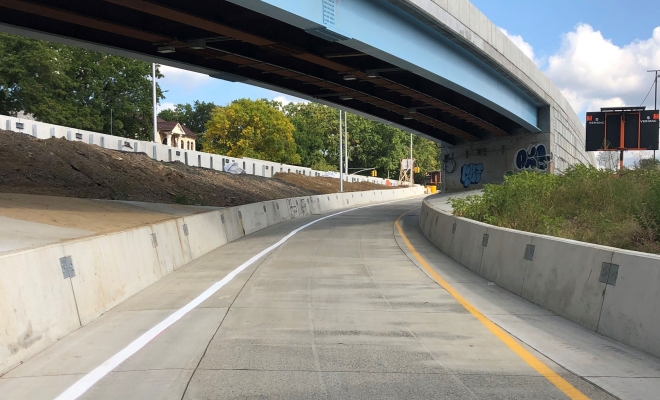 Governor Kathy Hochul today announced a milestone in the Kew Gardens Interchange Phase 4 project in Queens. Construction was completed on two newly reconfigured ramps that will improve safety and reduce congestion along this busy suburban corridor used by hundreds of thousands of commuters every day to reach John F. Kennedy International Airport and other key destinations throughout New York City and Long Island. The new ramps will facilitate connections for motorists entering the Grand Central Parkway westbound from the Union Turnpike Westbound, and for those traveling from the Jackie Robinson Parkway eastbound at Exit 8W to the Grand Central Parkway.

The new ramps, which will be fully open on Friday evening, are a signature item of the state’s ongoing $ 365 million Phase 4 project of the state Department of Transportation, which will help reduce safeguards, reduce vehicle emissions and facilitate continued economic growth throughout the metropolitan area. .

“We are committed to rebuilding our infrastructure to meet the challenges of the 21st century and help our local communities thrive” Governor Hochul noted. “These new ramps at the Kew Gardens interchange will help reduce congestion and make it easier for motorists to navigate this vital interchange, keeping goods and people moving more safely.”

The new ramp from Union Turnpike westbound to Grand Central Parkway westbound eliminates the previous need for motorists to come to a complete stop before entering the boardwalk, allowing for a more efficient merger of traffic and reducing congestion on the boardwalk. both routes.

The new Jackie Robinson Drive Eastbound ramp at Exit 8W to Grand Central Drive Westbound has been redesigned to reduce a significant curve that previously existed on Exit 8W. The new ramp, which is based on a new bridge structure, has standard lane and shoulder widths, which were not previously available. The project also increased the length of the junction between Eastbound Jackie Robinson Drive and Westbound Grand Central Drive – which allowed for the removal of a stop sign at the end of the ramp – and improved drainage systems. These improvements will allow motorists to merge more safely and efficiently at this location.

In addition, rehabilitation work on the Jackie Robinson Parkway Exit 8E to the eastbound Grand Central Parkway was also completed.

Representative Grace Meng said: â€œAs I said, continued investment in our local roads and highways is crucial, especially as we seek to improve our infrastructure and rebuild better. The completion of these new ramps, and the improvements that result from them in terms of safety and congestion reduction, will improve travel for Queens residents and anyone who uses this section of highway. Thank you to Governor Hochul and the New York State Department of Transportation for continued to advance this project.

State Senator Leroy Comrie said: â€œI would like to congratulate Governor Hochul and NYSDOT Commissioner Dominguez for completing the Kew Gardens Interchange Phase 4 project. Utopia Turnpike has been a major headache and a source of frustration for motorists. As we continue to find ways to improve safety and reduce emissions, I am pleased that the completion of these new ramps will provide Queens drivers as well as visitors to the Borough of the world with better access. and better mobility to JFK and other parts of the city. “

State Senator Joseph P. Addabbo, Jr. said: â€œThe completion of these two ramps brings much needed relief to the hundreds of thousands of daily drivers on the Kew Gardens interchange. Motorists no longer have to worry about construction going on in this area creating detours and confusion, and drivers will be thankful that the new ramps will reduce congestion on these major highways. I’ll be one of those grateful motorists as I take the interchange every time I drive to my office in Albany. I thank the NYS DOT for their work on this part of Phase 4 of their project. ”

Assembly member Daniel Rosenthal said: “As New York continues to rebuild itself from the devastating effects of this pandemic, it is crucial that we have the infrastructure to support a recovering economy. This latest development of the Kew Gardens Interchange project will benefit both my constituents and to our city as a whole. I thank NYSDOT for its long-standing commitment to this initiative. “

Assembly Member Andrew Hevesi said: â€œThese ramps will facilitate traffic and provide additional safety measures for the thousands of our neighbors who use this road every day. I am grateful to Governor Hochul for the early completion of this project.

Queens Borough President Donovan Richards, Jr. said: â€œThe completion of these ramps is another step forward in the continuous improvement of Queens transportation infrastructure. Motorists who use these ramps will now benefit from safer and smoother journeys thanks to their reconfiguration. The Kew Gardens interchange project is an undertaking of vital importance to our borough transportation network, and I thank Governor Hochul and State Transportation Commissioner Marie-ThÃ©rÃ¨se Dominguez for makes this project a priority.

The Kew Gardens Interchange is the complex intersection of the Grand Central Parkway, Van Wyck Expressway, Jackie Robinson Parkway and Union Turnpike, serving more than 200,000 vehicles per day. The New York State Department of Transportation is making a number of operational improvements with four construction contracts at the interchange valued at nearly $ 700 million. The four phases of the project improve safety and traffic flow on Interstate 678 (Van Wyck Expressway), Grand Central Parkway and Jackie Robinson Parkway. Work on the first phase began in 2010 and the final phase is expected to end in 2022.

The completed Phase I project included widening part of the Van Wyck Expressway and rehabilitating the exit ramp from Van Wyck northbound to Queens Boulevard westbound, four bridges over Van Wyck, the Van Wyck Bridge on Main Street and the Queens Boulevard Bridge on Main Street. This project also included the construction of auxiliary lanes on the northbound and southbound Van Wyck lanes between Grand Central Parkway and Main Street and provided a dedicated southbound exit lane to Hillside Avenue.

The completed Phase II project constructed a new, wider viaduct north of the Van Wyck Highway, which has three lanes of traffic now that Phase III is complete. In addition, it replaced the one-lane entrance ramp connecting the Jackie Robinson Parkway and Union Turnpike to the Van Wyck Expressway northbound with a new two-lane ramp. A new deck was installed on the Eastbound Union Turnpike Bridge over the Grand Central Parkway connecting ramps, and a new deck and steel beams were installed on the bridge where Union Turnpike and Jackie Robinson Parkway merge.

Completed Phase III replaced the existing deteriorated two-lane southbound Van Wyck Expressway viaduct over the Grand Central Parkway with a continuous three-lane viaduct, and constructed new exits to the Union Turnpike westbound and the Jackie Robinson Parkway. The three lanes of the Van Wyck Expressway now also merge with two lanes of the Grand Central Parkway over a longer distance.