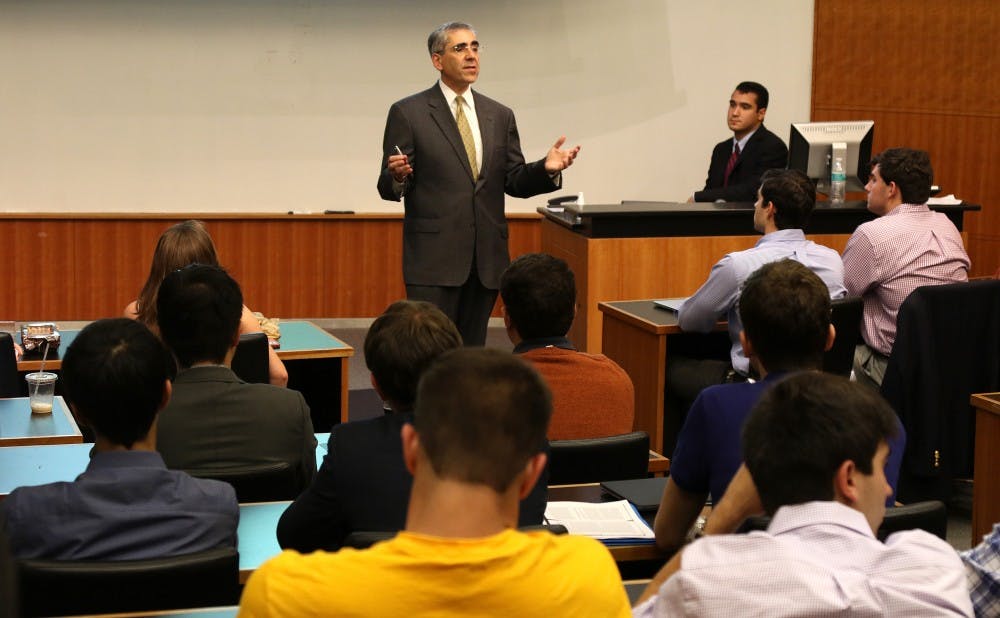 A ‘second Duke education’: Communications director Michael Schoenfeld looks back on his 14 years at the university

More than four decades ago, Michael Schoenfeld took his first steps on the Duke campus as an undergraduate student. In July he will graduate from ‘the Duke’s second education’ – 14 years as the University’s chief spokesman.

For more than a decade, Schoenfeld, Trinity ’84, oversaw communications for the Duke and its medical centers as vice president of public affairs and government relations and director of communications. He was integral in founding Duke Kunshan University and led Duke in DC, and was a visiting professor of practice at the Sanford School of Public Policy, where he taught a course on media and politics.

But the path to his career at Duke was far from straightforward.

“You don’t go to college and say, ‘Oh, I think I want to be the external affairs director of a big university,'” he said. “I didn’t know it at the time, but it was triggered at Duke.”

Schoenfeld graduated with a BA in Public Policy Studies in 1984. His passion for media relations first surfaced during his undergraduate years, where he helped launch WXDU, the FM radio station of Duke.

After earning a master’s degree in public policy from Stony Brook University in 1986, Schoenfeld spent 11 years working in Washington, D.C. – seven with the Voice of America radio network and four as senior vice president for politics and public affairs at the Corporation for Public Broadcasting. .

But it wasn’t until he was recruited as vice chancellor for public affairs at Vanderbilt University in 1997 that Schoenfeld set foot on a college campus as an administrator — and quickly fell in love.

For Schoenfeld, a university is an “exhilarating and exciting” place, akin to a city complete with everything from public services to international relations.

“Every part of the human experience, from birth to death, takes place on these campuses,” he said. “You are involved in everything.”

When his alma mater recruited him as vice president of public affairs and government relations in 2008, Schoenfeld was reluctant to leave Vanderbilt. But after spending more time with then-president Richard Brodhead and other senior executives, the opportunities offered by Duke eventually became irresistible.

Although some things — the chapel, the biology building’s camel statue, Coach K — never change, Schoenfeld described being part of Duke’s rapid evolution into a global university as a “great honor.” and privilege”.

“There aren’t many universities that have gone as far as Duke, as high as Duke, as fast as Duke,” he said. We are not even 100 years old yet.

As the University’s Chief Ambassador, Schoenfeld has worked to expand its global presence, traveling to Kazakhstan and Argentina and championing Duke with the media, governments, and donors.

He was also instrumental in founding Duke Kunshan University, which he calls “a small part of Duke’s global footprint” and one of his proudest accomplishments. He described the emotions associated with building “a university from the ground up” – “exciting and exhilarating and frustrating and infuriating and ultimately fulfilling”.

“I’ve probably visited Kunshan 20 times, at least in the past 13 years, and with every step I watch it go from an empty field to a giant construction area to a thriving campus,” he said. declared.

Schoenfeld also led Duke in DC, which he calls “the University’s embassy in Washington.” Using an integrated model involving all aspects of the University under one roof, the office focuses on policy advocacy and education.

He was also a professor of practice at the Sanford School of Public Policy, pre-major adviser, and founding adviser to TedxDuke. He still keeps in touch with the students of his first classes and his advisers.

Schoenfeld pointed to a black garment bag hanging behind his office door — his academic robes. He never missed an opportunity to parade there during a summons or a beginning.

“If you work at a university like Duke and you don’t take every opportunity to interact with students, you’re missing out on one of the great unique benefits of being at a university,” he said. declared.

For Simmons, Schoenfeld is not just a colleague, but an “outstanding mentor and friend”. He highlighted Schoenfeld’s expertise, as well as the innovative ideas he brought to the table.

“There are very few people, if any, who are so respected in higher education, especially in government relations. [and] public affairs is part of our world,” Simmons said.

Provost Sally Kornbluth wrote in an email to The Chronicle that she “found his remarkably sound advice, wisdom and perspective invaluable”, making him “one of the most trusted and thoughtful”. [advisors] to all members of Duke’s leadership team.

Schoenfeld expressed confidence in the University’s choice of his successor, who he is sure will be “a top-notch talent that will make Duke even better than I have been able to do.”

Duke has been one of the “most important transformative institutions[s]in his life, Schoenfeld said. It was the same place where he was educated, networked and started his career. It was also where he met his wife Elizabeth, Trinity ’84.

Still, Schoenfeld believes his second education as a duke proved more formative and valuable than the first. He has been a top student for the past 14 years, he said, as he took every opportunity to grow, learn and test his view of the world.

Get The Chronicle straight to your inbox

Audrey Wang is a sophomore at Trinity and the editor of college news for the 118th volume of The Chronicle.